Numerical simulations have become an invaluable tool to study the formation of stars. Highly non-linear interactions (e.g. self-gravity and turbulence) and the complex physics (e.g. chemistry and radiative processes), which are essential to understand the assembly of stars, reduces analytic studies to important but simple models. On the other hand, star formation spans many orders of magnitudes in length scale (from parsec size clouds to solar objects), which can not be simulated on a static grid. In our research group we are using two different approaches to overcome this barrier: smooth particle hydrodynamics (SPH) and an adaptive mesh refinement (AMR) grid code.

SPH is a Lagrangian method in which the fluid properties are carried by a population of particles which are free to move under the forces they experience from their surrounding neighbours. The Lagrangian nature of the method means that regions of high denisty are automatically higher resolved than regions of low density. With this powerful technique, one can study many orders of magnitude in the fluid properties. For non-magnetic applications, such as the gravitational fragmentation, collapse and evolution of a molecular cloud, this is highly advantageous, and hence SPH has enjoyed wide-spread use in the study of star formation. The lack of preferred geometry in SPH also makes is idea for studying situations where angular momentum transport and/or vector evolution is crucial. 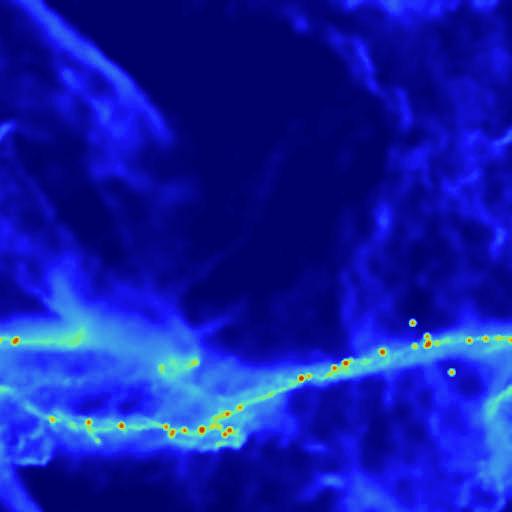 A well documented, maintained and publicly available code is, GADGET.

A good starting point for learning about SPH is Monaghan 1992

AMR codes are based on grid code techniques where the fluid equations are solved using a finite difference scheme. Additionally, AMR codes are able to increase the resolution dynamically wherever necessary by including higher refinement regions during runtime. Typically this results in a patchwork of high and low resolution regions within the simulation box. Examples of grid codes with AMR technique are ENZO which is used for cosmological simulations (Abel 2002), RAMSES, NIRVANA, and FLASH which is used by our research group (e.g. Banerjee et al. 2006) The figure shows an example of the grid structure (done with the FLASH code) where a density refinement criterion is applied. High density regions (central region) are resolved with a finer spatial resolution than lower ones.

Our work makes use of a number of national computing facilities, as well as local facilities here in Heidelberg and at the AIP (Postdam). The homepages for the national facilities are listed below.